Caribbean food is rich in flavours and personality, with influences from many other countries. Caribbean food is fresh, colourful and often very local, particularly on Dominica where the fresh fruit & vegetables are so easily available around the island. A cooking class is an excellent way to learn about the cuisine on Dominica as well as a nice introduction to a few recipes you might even want to try back home.

Daria has been running cooking classes since 2006 and has won over her customers with her cheery approach and in depth knowledge of Caribbean cuisine. She recently filmed with her beloved ‘Chef Ainsley’ British chef Ainsley Harriott as part of his show ‘Caribbean Kitchen’ which can be seen on ITV.

A class with Daria is like learning recipes from an old friend, she’s passionate about using fresh, local ingredients and many of them come from the surrounding houses and almost all from Dominica itself, except the rice which is imported from a neighbouring island.

I opted for a private class with just Daria and her daughter as an assistant and then my friend & I. As it was a small group we cooked in Daria’s private kitchen upstairs, but with larger groups particularly when a cruise ship has docked then she has a huge kitchen downstairs which can cater for lots of people cooking at once.

We cooked a variety of dishes with Daria talking us through the ingredients for every recipe and encouraging us to get stuck in with the preparation & cooking itself.

First we prepared some Titiri fish cakes/fritters. Titiri is a local fish which seems to come under different names around the Caribbean, the fish is mixed in equal parts with wholewheat flour, lime juice, chilli sauce & coriander before being fried in oil until it’s slightly crispy on the outside and doughy in the middle. It made a lovely snack often chosen for breakfast in Dominica but also went down a treat as a mid cooking nibble. 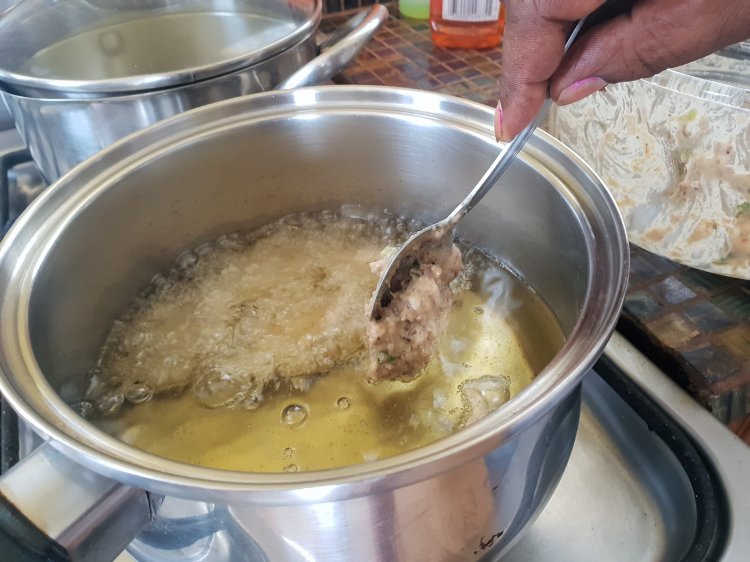 Another favourite dish we prepared was Creole Fish. A colourful recipe of yellow fin tuna served with pepper, onion, tomato & a marinade ofparsley celery, spring onion, thyme, chives, garlic, lime & parlsey. Creole food is a fusion of cultures and history and Daria describes creole as having attitude. In her own words “Creole is colour, creole is flavour.”

Alongside a coconut rice & beans and plantain cooked 2 ways we dined on the balcony with beautiful garden views before finishing the meal with a fruit salad mixed with local spice infused rum.

Daria’s class was one of the most enjoyable things we did in Dominica and the food was certainly one the top meals of the trip as well. It’s a fantastic introduction to Dominican food and a fun way learn about the flavours of the island.

To book visit Experiences Caribbean |Classes usually run every Tuesday and Friday, but they can be flexible. Prices are $100 USD per head which includes the class, a full meal and 2 free drinks. Up to 30 people.