Cahuita National Park next to the beach town of Cahuita is a popular park with some great hiking trails and a lovely curve of beach usually great for swimming.

Cost – Free
It’s one of the only national parks in the country that is free to enter, but donations are encouraged. Most people seemed to give about $5. If you enter from the main entrance near Cahuita town you have to sign in to enter but don’t require ID.

What to bring –
– Towel or something to lie on – There are no deckchairs although there are a few benches on the main route, so if you’re planning on having some beach time then you’ll need something to lie on.
– Mosquito repellent – Unfortunately even during the day it’s quite mosquito heavy
– Sun cream – An obvious one but a must. There is plenty of shade on the main paths but as soon as you venture onto the sand you’ll be in direct sun.
– Drinks and food – There are no shops or food vendors in the park so be sure to bring plenty of water and a picnic if you’re staying for long. Make  sure to take your rubbish with you when you leave.
– Camera – There is so much to see and you’ll be disappointed if you aren’t able to take some photos. 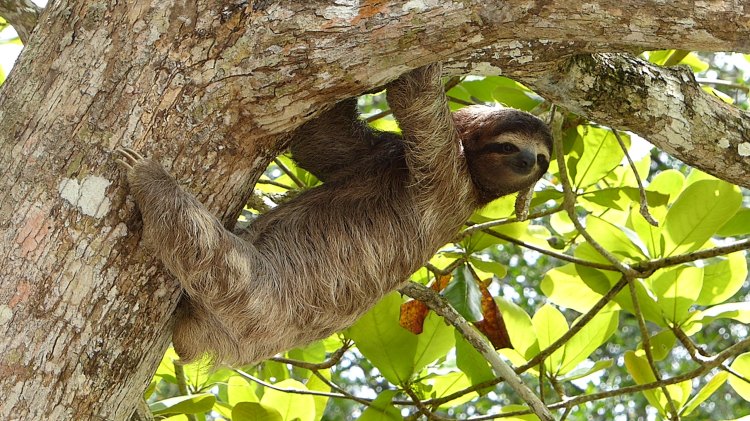 Sloths – It was fairly easy to see a number of sloths during my visit, including one that had got a little lost and was solemnly making his way out of the park clinging onto the electricity pylon.

Monkeys- The monkeys in the park were cheeky and unafraid, stealing snacks from tourists and swinging from tree to tree.

Raccoons – Although considered a pest by some, the creatures with their robber mask like faces were inquisitive and friendly. It’s not allowed to feed the animals but unfortunately many people do and the raccoons have learnt this; often approaching tourists to try and get some food.

Do you need a guide?
It’s not necessary to take a guide for most people. The main trails are fairly well signposted and as long as you leave plenty of time you’ll have no problems. The animals in general aren’t that shy and will be quite easily spotted. However if you’re a very keen nature lover and really want to spot everything you can hire a guide from the park entrance. Price negotiable.