I only had a couple of days in San Francisco, but my wanderlust side was desperate to see some highlights of the city. San Francisco Bay and of the Golden Gate Bridge, a glimpse of Alcatraz and of course some top eats. A little bit of research lead me to Pier 39, a dining and shopping area in the Fisherman’s Wharf area of SF.

I took the old fashioned cable car from Market Street to the end of the line Fisherman’s Wharf, a 20 min $7 ride up and down the hills of the city. `The cable car ride is fun in itself, if not a little crowded with people, but it’s a SF must do, and very convenient for Pier 39.

The Pier itself is colourful and vibrant with a constant hustle and bustle of people and it has a whole host of drinking and dining options, especially if seafood is your thing. For me though, there was only one choice; Clam Chowder in a sour dough bowl. Admittedly it’s dishes like this that might be the reason my pants are getting a little tight, but oh boy it’s delicious. Warm and creamy, with locally sourced clams from Pier Market Seafood Restaurant, it was a definitely a dish that lives up to it’s reputation and one I’d love to try again!

One thing I didn’t know about the pier is that it’s home to a huge number of Sea Lions! They started arriving in the area in 1990 after the Loma Prieta Earthquake but due to a plentiful herring supply numbers can reach 900 in Winter months! I’ve never quite seen wildlife in a city like that before, the sea lions were play fighting with each other and causing quite a scene, on top of all the noise!

Obviously being in SF I was really keen to see the Golden Gate Bridge and although I could see it peeking out from behind the clouds from the pier itself I really wanted to get up close. From the edge of Pier 39 you can buy tickets for the Blue & Gold Fleet ferries. They go out regularly throughout the day for one hour trips, out of the bay and under the bridge. 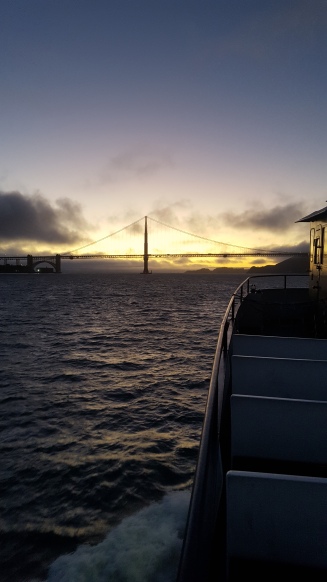 I chose to take the final trip of the day at 1830, which offered some absolutely stunning sunset views of the bridge as we sailed under it, the red cloud around the bridge looked magical and photos really don’t do it any justice. As we sailed back towards the pier we took a route around Alcatraz and got to see it all lit up before heading back to our start point for a nightcap.